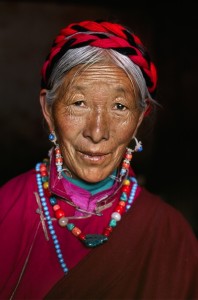 “The face is the mirror of the mind, & eyes without speaking confess the secrets of the heart.” (St. Jerome)

Photo is from the Faces of Tibet album by Steve McCurry, a renowned photojournalist most famous for the “Afghan Girl”, featured on the June 1985 cover of National Geographic Magazine. He has photographed in many war zones including Iran, Iraq, Lebanon, Cambodia, the Philippines, Pakistan, & Afghanistan. He was featured in a 2003 documentary titled, “The Face of the Human Condition”.

His artistic eye is obsessed with human faces & he has captured their beauty as few others. Muhammed Muheisen, who photographs children in war zones & as refugees, is another whose photographs have that remarkable character. Surely they must have influenced the wonderful new trend started by “Humans of New York” (HONY). Unlike HONY who quotes something endearing about the subjects, McCurry doesn’t tell us much about his subjects. He lets the faces speak for themselves. “If you wait,” he said, “people will forget your camera & the soul will drift up into view.”