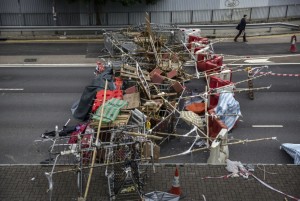 “Something there is that doesn’t love a wall” but these makeshift barriers are another matter entirely. At least two major commercial districts in Hong Kong are still filled with Occupy-style encampments despite frequent assaults from riot cops & goon squads. Hong Kong’s High Court has just authorized cops to go after the protesters & arrest them & these barriers are a protesters best defense.

Authorities are in something of a tough spot since they do not want another scenario like Tiananmen Square but they do want to clear the areas & end the protests which began September 26th. Chinese officials in collusion with Hong Kong tycoons continue to hold out against demands of the protesters for democratic elections. Controlling elections is about maintaining one-party rule in China. Any concessions to the Hong Kong movement, any bending to mass pressure would set a political precedent that would reverberate in mainland China, already seething with political discontent.

Hong Kong authorities certainly consider this barrier an eyesore; supporters of the democracy movement consider it an inventive construct, almost a work of art. We see that pile of broken umbrellas, pallets, & lawn chairs as a monument to defiance against tyranny. And we stand with them.