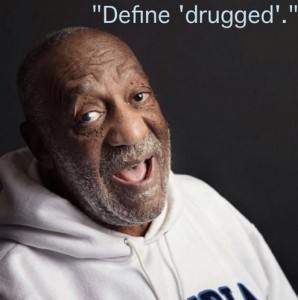 For how many years have Black parents & especially Black males had to put up with Bill Cosby pontificating all over the media about their alleged insufficiencies? He castigated parents for raising undisciplined, irresponsible kids, for teen pregnancy, & school dropout rates; he upbraided Black men for beating their wives & made it seem they all did it; ridiculed them for bad grammar & cursing; mocked Black unemployment & minimum wage jobs saying they brought it on themselves with reckless life styles & mostly he told them to stop blaming whites. The racists ate it up & the power elite considered him a God-send because it got them off the hook big-time–especially for their war on Black teens–about which he never raised a peep of objection.

He’s apparently emboldened imitators, including Charles Barkley who claims Blacks are brainwashed to think “if you’re not a thug or an idiot, you’re not Black enough”. We don’t want to throw stones, but how does such a fine, upstanding citizen as Barkley explain his compulsive gambling habit where he’s pissed away nearly $13 million? It’s not the worst of vices but some would call it idiocy, especially the ones working long hours at minimum wage. Of course as long as Barkley keeps talking ragtime, the TV gigs will keep rolling in & he can afford to throw money away.

But now, after years of Cosby’s epic tirades, we learn that over several years more than 15 women including a former cast member & at least one teenager have accused Cosby of sexual assault, claiming he targeted & groomed his victims, drugged & raped them. One woman filed a suit against him in 2005 with ten women lined up to testify he’d also raped them. Cosby avoided prosecution by settling the lawsuit out of court for an unspecified amount of money. It’s called hush money. Media never made a big issue out of it because then he’d lose his use-value as a mouthpiece justifying racism. So the victims remained silent & the rapist remained a loud-mouth without shame.

It could be considered a cautionary tale about throwing in your lot with tyranny against the oppressed for personal gain. But it’s also another case when ‘karma is a bitch’. A few weeks ago, Hannibal Buress, a Black comedian stirred controversy in a stand-up routine where he called Cosby a rapist & castigated him for smugness. Then Monday, Cosby’s Twitter account posted a link to a meme-generator on his website inviting followers to “Go ahead. Meme me!” Karma used a hashtag to wreak vengeance. The meme thing backfired when followers created them about the rape charges with memes like “My two favorite things: Jello pudding & rape” & “When you realize you got enough cash to pay off the victim”. Cosby’s PR team took the meme-generator down but many found their way to Twitter. Karma, thy name is justice! And Twitter is your game.

It isn’t going to be easy for Cosby to come back on TV spouting homilies & reproaches to Black kids or telling parents what they’re doing wrong. That gig is over. And another fool bites the dust!