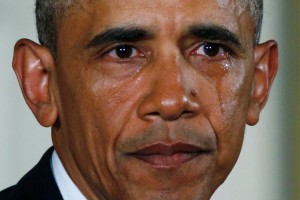 A portrait of stinking hypocrisy: Obama shedding tears while making a statement about what his administration will do to reduce gun violence in the US.

Obama–the Commander-in-Chief of long, barbarous wars in Afghanistan, Iraq, Syria, Yemen; the military supplier & financier of ethnic cleansing in Gaza & drone bombing in Pakistan & Yemen; the deployer of psychotic special forces to several African countries; the man who promised in his campaign but has not closed Guantanamo & other CIA torture prisons; whose administration has reduced countries like Somalia & Libya to political chaos & rubble; whose administration bankrolls the military dictatorship in Egypt & the feudal dictatorship of Bahrain; who turns a blind eye to genocide of Rohingya in Myanmar; whose administration has not prosecuted police violence in the Black community. This criminal is dropping tears over gun violence?

He’s playing us for schnooks. He can put a sock on the melodrama.