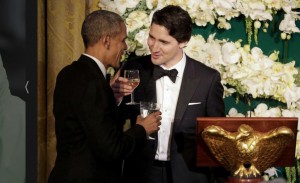 These are the two hopey-changey guys at the White House state dinner for Canada toasting each other for an electoral scam well-played.

Obama said in a recent interview that people in the US were better off under his tenure than when he entered office. Which people was he talking about? The celebrities & elites invited to dine at the state dinner on an individual plate that cost more than most working people’s social security checks?

The White House once took French cuisine off the menu to protest France’s reluctance on the 2003 Iraq War. But now that France (under Hollande, a Bernie Sanders kind of socialist) is again fully on-board with militarism & bombing Syria & Iraq, all is well in the White House kitchen & the menu was entirely French to honor Trudeau for sending Canadian war planes to bomb Syria & Iraq.

Salut & damnation to a scam well-played. Just remember, you can fool the same people all of the time & all of the people with cognitive dissonance too. But most ‘people’–at least those not better off–have had it with the hopey-changey crap.