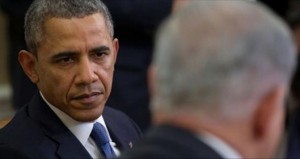 Want to know why Netanyahu is so defiant & dismissive, sometimes even contemptuous toward Obama? Zionism, in its foundations, rejected the broader struggle against racism & colonialism out of a sense of Jewish supremacy. Racism is integral to Zionist ideology. Netanyahu, partially deranged by his commitment to a Jewish-only state, must find his racism irrepressible in the presence of a Black president who he cannot accept as a peer.

Obama does not establish US policy toward Israel but only administers it. That’s why despite Netanyahu’s arrogant lectures & rebuffs, Obama does not threaten to curtail US military or settlement aid but is proposing to increase it. Obama said in a recent interview for The Atlantic magazine that he is committed to Israel’s defense, that “it would be a moral failing” for him as US president not to defend Israel. A moral failing not to defend colonialism, apartheid, ethnic cleansing, racism?

That defense must be galling for Obama since he must surely viscerally feel & rebel against Netanyahu’s racist contempt. After all, not only does he have his dignity to maintain as a person & a president, but he’s a graduate of the Ivy League & is brainwashed to think himself superior. That would explain why in the Atlantic interview, Obama describes his rebuke when Netanyahu was rudely lecturing him in the White House. His response was, “Bibi, you have to understand something. I’m the African-American son of a single mother, & I live here, in this house. I live in the White House. I managed to get elected president of the United States. You think I don’t understand what you’re talking about, but I do.” That’s a petulant, sorry-assed response of personal irrelevancies & non sequiturs to assert his dignity because he cannot threaten the withdrawal of military aid. In fact, during the last Israeli election campaign, the Obama administration itemized the assistance it was giving Israel, including travel & resettlement money for colonial-settlers moving to Israel to take Palestinian land.

US policy toward Israel is not based on humanitarian regard for Jews but on US strategic interests in controlling the Middle East. If Obama tried to change or in any way alter that policy because of racist rebuffs from Netanyahu, he would be bounced sky high by the ruling elite. And both Obama & Netanyahu know that.

There’s no reason to feel pity for Obama since he’s administering US involvement in the racist ethnic cleansing of Palestinians. He personal discomfort exemplifies the rancidity at the heart of Zionist ideology.

(Photo of Obama with Netanyahu from Haaretz)