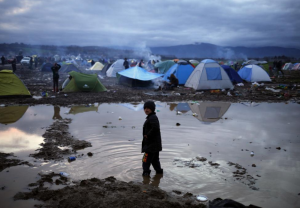 This is one of the refugee camps on the Greek-Macedonian border where 30,000 war-traumatized people, including children, elderly, infirm, disabled, pregnant women & others with special health needs, are living in these kinds of conditions. The European borders from here north are locked down tighter than the apartheid wall in Israel.

The EU will likely soon come with squadrons of riot police to board them on buses for forcible deportation. In such chaos, maybe they’ll be returned to their own war-torn country; maybe they’ll end up in another war-torn country. Most will land up in Turkey which has no provisions for them for housing or social services.

EU officials, who appear to be drawn from the criminal dregs of society, are strutting about boasting to media about this “final solution” to the refugee crisis. When the history of neoliberal barbarism is finally written, they will take their place with every other thuggish gestapo guard & fully deserve the opprobrium of history.

For now, our job is to protest far & wide demanding asylum as a human right sanctioned by centuries of human civilization & not to be flouted by the thuggish halfwits, the ugly, stupid white people who run the European Union.