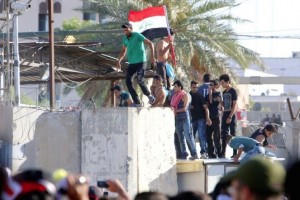 For the second time within a month, thousands of protesters in Baghdad, Iraq stormed the Green Zone which Al Jazeera says “houses parliament, government buildings & foreign embassies.” The Green Zone is a 10-square-km (3.9 sq mi) area completely surrounded by steel-enforced concrete blast walls with entry points controlled by Iraqi & US troops.. It is a military fortress with the biggest US embassy in the world, & with the UK, Australian, & Egyptian embassies. It garrisons US & foreign troops, mercenaries, & is the base for military contractors.

To Iraqis, the Green Zone represents the US occupation which Obama declared ended in 2011. It is a monstrous edifice which was also the focus of protests during the Arab uprisings in 2011. It will be a glorious day when Iraqi protesters have razed it to the ground & send the whole lot of criminals packing.

Iraqi military forces opened live fire & used tear gas against the protesters. Media reporting on the protest is canned from one media source to the next & comes straight from the military. They say “dozens” of protesters were injured & that “authorities could not immediately verify reports that several civilians had been killed.” A media that wasn’t embedded up the ass of the US Pentagon would consider it a matter of journalistic integrity & responsibility to find out just how many were injured & killed. When soldiers are shooting live ammo, it is likely there were fatalities. Borrowing a page from the Israeli army, military authorities actually claimed some Iraqi soldiers were stabbed.

It was reported that protesters appealed to the soldiers by chanting “Oh army, the country is hurt! Don’t side with the corrupt!” It is a profound political tragedy that international antiwar forces are too weak to provide massive solidarity with the Iraqi people. No political mission is more imperative than rebuilding that movement. On May Day, in the state of Odisha, India, protesters carried a banner saying “American attackers should lick Iraqi dust!” We second that.

Our fullest solidarity & deepest respect to the Iraqi protesters standing against one of the most powerful & barbaric military forces in the world.