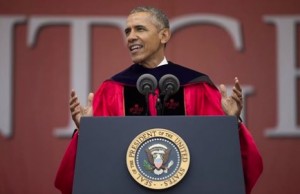 When Obama spoke at Rutger’s University commencement last Sunday, he chided students for protesting & forcing former Secretary of State Condoleezza Rice to withdraw as a 2014 commencement speaker because of her role in the Iraq War.

Obama said: “Now, I don’t think it’s a secret that I disagree with many of the foreign policies of Dr. Rice & the previous administration, but the notion that this community or the country would be better served by not hearing from a former Secretary of State, or shutting out what she had to say, I believe that’s misguided. I don’t think that’s how democracy works best, when we’re not even willing to listen to each other.”

Well I’m all ears & I would like to know exactly which of Bush’s foreign policies that Obama disagrees with? Because from Texas they are absolutely indistinguishable. What exactly does Obama think we have to learn from a lying-assed war criminal? If our political officials don’t listen to us, why the hell should we listen to them?

And lastly, it’s confusing why students didn’t protest Obama for continuing the foreign policies of the Bush administration? Where were all the thousands who rallied on the campus with Bernie Sanders just a few weeks ago to call for a political revolution?