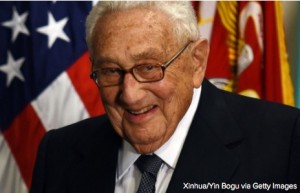 Every book written by or about Kissinger is at least 1,000 pages long, presumably to dispense the wisdom of this monstrous war criminal who negotiated detente with the Soviet Union & China–both wallowing in political decline & corruption. There’s some kind of twisted mystique of genius around the guy when the secret of his success has always been brute force & the extremes of violence used against several million people all over the world on every continent.

The Washington Post made asses of themselves when they said
Drumpf’s meeting with Kissinger is “building relationships with Republican elders.” How do they explain Clinton’s long political relationship with Kissinger? Like it or not, Kissinger is the realpolitik face of US foreign policy–no matter which party is in office.

Kissinger is now 92 years old. Though he’s been dead for a very long time. We look with anticipation & glee to writing his obituary.