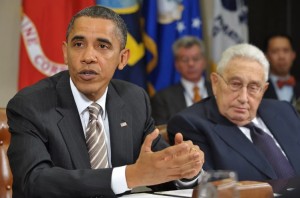 On Monday, US Secretary of Defense Ashton Carter, acting on behalf of Obama, awarded Henry Kissinger the Distinguished Public Service Award, the highest award presented by the Pentagon to a private citizen.

The list of Kissinger’s human rights & war crimes boggles the mind; the estimates of his victims is in the several millions–including in Chile, Argentina, Vietnam, Cambodia, East Timor, Pakistan just during the Nixon & Ford regimes–& he continued to advise presidents thereafter in several murderous US wars. He reportedly joked & sneered about some of the monstrous crimes he was responsible for.

Some consider the toothy-grinned Obama as cool, hip, a regular fellow who’ll morph into a humanitarian when his term is up. But his association with & honoring of Kissinger (not to mention his several wars) identifies him as a lying-assed scoundrel who merits the condemnation of all men & women of good will.