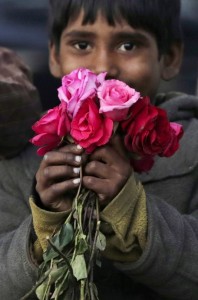 Beautiful image, isn’t it? Except the little guy is a child worker in Lahore. You can see lots of children working as street venders in Mexico, none of them looking anything but miserable. Most photos of child laborers are wrenching images, not endearing like this small boy. American seniors wintering in southern states seem to walk past them without outrage–like they were part of the scenery & not children. Of course there’s no reason for smugness since the US allows small children to work as farm workers.

Child labor is increasing exponentially as neoliberal capitalism continues its decline into barbarism. The patricians running multinational corporations exploiting children as miners, sweatshop workers, farm workers, sex slaves have no scruples because racism is a fundamental component of child labor along with the economic compulsion to drive down the political power of adult labor. Child labor is an intolerable scourge for humanity & must be actively opposed.

In 2012, the lesser evil Obama regime destroyed legislation to protect child farm workers in agribusiness. There are an estimated 800,000 (mostly Mexican) small children working with pesticides, dangerous tools, livestock in the US. Obama made it illegal to ever again attempt to even monitor labor practices for child farm workers.

Many child garment workers lose their lives in factory fires; Many children are crushed & maimed in mining accidents, livestock pens, silos, or are poisoned by chemicals used in mining & agribusiness.

There are images of children garment workers in Bangladesh being beaten by cops while on strike over working conditions. No one could not admire their courage but only predators can argue that children should be on picket lines rather than playgrounds.
Once again, child labor is an intolerable scourge for humanity. Our historic mission is to make this world suitable for children to live & love in.