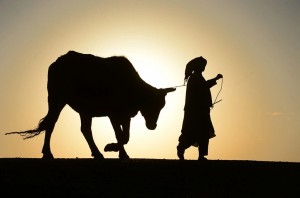 Nothing will ever make us long for the ‘good old days’ of war correspondence with Lara Logan, the embedded & Islamophobic CBS reporter who acted like a cheerleader for US wars or with Richard Engels, the sycophantic NBC war correspondent. There was no distinction between their reports & press releases from the Pentagon. Does either network even have a correspondent covering any of the many wars now? Because there is almost no real news.

This photo is an example of war correspondence in the era of news blackouts & barbarism. The caption reads: “Herat, Afghanistan–A man walks with his cow at sunset.” Golly it’s bucolic. But what about those US bombers?

This photojournalist, Aref Karimi, was born in Herat & works as a stringer for AFP & as a freelancer for The Times, Wall Street Journal, Washington Post & World Press. He has photos covering the war but media does this bucolic stuff instead.

Karimi is part of an Afghan photography initiative. In their ‘about’ statement, they said, “When the Taliban came to power they did not allow any depiction of living beings. In fact, since 1996 they banned most photography altogether. The Taliban even went so far as to alter advertisements or signs that showed human & animal heads. After the overthrow of the Taliban in 2001, press restrictions were gradually relaxed & private media grew, but photographers & journalists in the new Afghanistan operate in one of the world’s most complex & contested information environments. Insurgents, NATO forces & the Afghan government are competing to control the dominant storyline. At times, the lines between propaganda, intelligence & journalism blur.”

A “complex & contested information environment” where you can’t tell the difference between propaganda, surveillance, & journalism. That’s the same thing they report in Kashmir & why we know so little about the Indian occupation. Actually it sounds a lot like czarist Russia or the USSR under Stalin.

Break the news barrier & demand US out of Afghanistan, Syria, & Iraq.