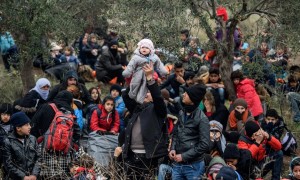 The news about refugees becomes more gruesome by the day. These are refugees waiting at Canakkale, Turkey for a raft to Lesbos, Greece. The UN count of January arrivals in Greece is 50,668 to date. Media reported yesterday that 25, including 10 children, had drowned when their raft capsized. Just this month alone, 236 have drowned. Some were reported burning their life vests in a bonfire to keep warm.

EU officials are pressuring Greece to do more to stop the movement of refugees. The Greek coast guard was already spotted disabling rafts in mid-sea. Is that the kind of proactive refugee policy being demanded? Or does the EU want the Greek military to just shoot them as they come ashore?

EU officials are also in Turkey trying to get the regime to honor the agreement they hammered out in November to stop the movement of refugees from Syria, Afghanistan, & elsewhere. In return for 3 billion euros (USD$3.2 billion), visa-free travel for Turks within Europe, & renewed talks about Turkey entering the EU, Turkey was supposed to have tighter, more militarized border controls & naval patrols. There were news reports of Turkish coast guard boats disabling refugee rafts mid-sea. But apparently the EU hasn’t come up with the dough they promised so Turkey is not in full compliance with the agreement. The EU is looking more like a mafia operation than a governmental contraption.

Tuesday, the Danish parliament, following the lead of Switzerland, approved a law allowing refugees to be searched on arrival in the country & their cash & belongings confiscated if they have value over 10,000 kroner (£1,000) (USD$1,449) & ‘have no sentimental value to their owner.’ Who decides what has sentimental value? The justification for the Nazi tactics is to reimburse the government for the expense of processing refugees.

For decades, Scandinavian countries have managed to elude criticism despite deep involvement in military manufacturing & now in military operations in Syria & Iraq. Sweden had an international reputation for respecting human rights & accepting asylum seekers, including US conscientious objectors of the draft during the Vietnam War. But that’s about to change. Last week, Norway began deporting refugees to Russia through the Arctic. Finland is going to deport 20,000 of the 32,000 refugees it accepted in 2015 & Sweden announced it will reject the asylum applications & deport 80,000 of the 160,000 it accepted last year. The question is, where will they deport them to? Back to the war zones they came from?

The US, which is leading the military carnage in Syria & Iraq, has accepted less than 3,000 Syrian refugees since 2012. And there’s an even bigger problem that is not noted. Of the hundreds of thousands of refugees, the majority are Syrian. But there are hundreds of thousands of refugees who are Afghan, Pakistani, Palestinians from refugee camps in Syria (denied entrance to Jordan), from several African countries (where the US is involved militarily & economically), & others. What about them? Have any of them been given asylum?

The refugee crises all over this planet highlight the growing barbarism of neoliberalism which has no respect for national boundaries or sovereignty when it comes to plunder & war but then puts up the barricades when it comes to human rights. For working people, that doesn’t work.

It is more imperative than ever to rebuild the international antiwar movement & to demand that refugees from war & poverty be given every respect & right due under international law & every measure of human civilization. Open the damn borders, stop stealing from refugees, & end the deportations!