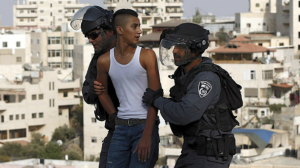 The Forward, a liberal Zionist publication, published an article titled “The Al Aqsa Protests Prove That Palestinian Nonviolence Has Arrived” by Palestinian Issa Amro. Amro begins the article: “My dream has always been to see my people in a mass movement of nonviolent resistance” & he describes the prayer protests in East Jerusalem against the occupation of the Al Aqsa compound. It’s an article worth reading from an activist in the West Bank but it is deeply misguided & conciliatory. It is not unarmed Palestinians who are violent but the Israeli military.

Amro apparently wants Palestinians to adopt the civil disobedience politics of Gandhi & Martin Luther King, Jr. How would that work out in Gaza with the blockade putting it on the point of collapse, without medical care, electricity, sewage systems, & living amidst rubble because the homes are all bombed to smithereens? How would that work out during Israel’s frequent carpet bombing sieges?

How would that passive stuff work out when settlers contaminate water wells, torch mosques, pull up olive trees, or when Israeli bulldozers mow down entire villages?

How does self-defense come across as violence to Amro? What are protesters in the West Bank supposed to do when Israeli soldiers come at them with bulldozers, tear gas, stun grenades? Stand in the path of those bulldozers peacefully? Like Rachel Corey did?
Get real! Palestinians have a right to defend themselves by any means necessary.

This young man is one of 160 Palestinian (30 under the age of 18) prayer protesters arrested during Al-Aqsa protests.