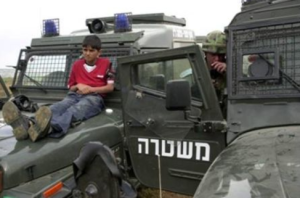 Someone challenged my post about Israeli soldiers using a blindfolded Palestinian youth as a human shield. How do we know Israel does that, she asked? We know it from several reliable sources: photojournalist documentation, Palestinian testimony, frequent reports by B’Tselem, an Israeli human rights group. The use of Palestinians, including children, as human shields by the Israeli army is beyond dispute.

Just like it is beyond dispute that Israeli bombers targeted children in the 2014 seven-week carpet bombing siege of Gaza. Of the 2,220 Palestinians killed, 547 were children; an additional 3,374 children were injured, 1,000 of them with permanent disabilities. Many require medical care unavailable in Gaza because of the Israeli blockade & destruction of Israeli medical facilities in the siege & they are unable to get permission from Israel to seek medical care elsewhere.

Then our challenger said an Israeli once told her the “conflict goes mostly unnoticed by Israelis because it’s not anywhere near them & doesn’t touch their lives.” Wow, isn’t that a mouthful of foolishness! All non-Palestinian citizens of Israel over 18 are subject to conscription to serve in the occupation. Does that leave them unaffected? Israel, the colonial-settler state, borders 41 kilometers (25 mi) with Gaza & 708 kilometers (440 mi) with the West Bank. Is all that war-mongering about Hamas rockets a great big fat lie? Because we are told Israelis living within 50 miles of the Gaza border live in terror of those rockets even though the few documented are no bigger than potholes.

But let’s get one thing straight: Israelis are human beings living in a militarized, colonial state on permanent red alert because their military is engaged in ethnic cleansing which Palestinians resist with all their might. Even if complicit in that colonial project–& not all Israelis are–enforcing apartheid & racism does not leave most Israelis unaffected. Militarism affects every aspect of society, corrupting everything, leaving nothing untouched, creating violence within the society after glorifying it in occupation.

Photo is Palestinian boy being used as a human shield by Israeli army.