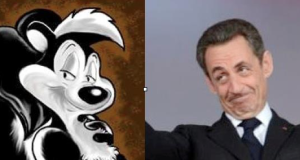 Former president of France Nicholas Sarkozy was bounced out of office in 2012 by Francois Hollande. If you can be defeated by that kind of turkey, you ought to give it up & go into hiding. But our man is coming back for more & has announced he will run for president in 2017.

It was so much fun describing his follies while president that some mistook my posts for sarcasm. But he is, in short, a detestable man without a single redeeming charm.

There are those who consider comparisons between Monsieurs Sarkozy (who I prefer to call Psychozy) & Pepe Le Pew undignified. Monsieur Le Pew could not agree more. In fact, he denounces the comparison as “merde” & threatens retribution against all who impugn his dignity by such an odious comparison.

While Monsieur Le Pew thinks a woman adores him when she physically assaults him, Monsieur Psychozy thinks citizens respect him even when he has to buy their votes.

We only point these troubling things out to understand what happened to the promise of the great French Revolution? How has it come down to Sarkozy & Hollande?