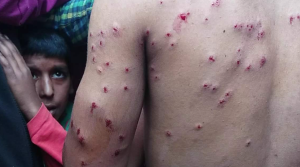 The Times of India reported today that the use of pellet munitions, designated falsely as non-lethal, has created such controversy that an expert panel assembled by the Indian government is discussing their replacement with another non-lethal weapon called PAVA shells. The article says PAVA munitions are newly-developed by Indian researchers for use in crowd control but they have been used in England for several years as an alternative to tear gas.

The panel also discussed a “dye marker grenade with irritant” similar to the purple rain they shoot from water cannons against protesting government workers in Srinagar which leaves dye stains for identification but the new weapons would be propelled by grenades & also contain an irritant to the skin & eyes. According to the article, the Indian army suggested the panel consider non-lethal weapons like sound cannons (also called stun grenades), pepper spray shotguns & PAVA grenades (also called chili grenades because a key component comes from chili pepper). But except for the PAVA grenades, the army already uses all of them along with rubber bullets, plastic bullets, wooden bullets, & truncheons for beating the hell out of protesters.

The chemical components & the delivery systems of pepper spray, tear gas, & PAVA shells differ but unlike pepper spray & tear gas, PAVA grenades temporarily immobilize & paralyze the target. The chemical components of all are toxic, extremely painful in contact with eyes & skin, & damaging to vision. They are a particularly serious health hazard to those with respiratory or skin issues like asthma or psoriasis, or those who are taking medications. There is a risk of death in all of them. Many are killed just by being struck with a grenade in the head or chest.

The designation of non-lethal is completely fallacious military double-talk like “collateral damage.” Lethal does not just mean fatal but life-threatening, painful, disabling, poisonous, toxic, destructive to long-term health, harmful to psychological well-being. Pumping people full of hundreds of lead pellets that cannot be removed from internal organs, shooting their eyes out, disfiguring their faces & bodies, permanently disabling hundreds through blindness & extreme pain, does not qualify as non-lethal to anyone who is not completely deranged. They are monstrous human rights crimes of the first magnitude.

The Indian government is not trying to phase out pellet guns because their use is barbaric or even because they stand condemned before the world but only because they are worried about potential human rights crimes prosecutions, more exposure of the brutalities & greater opposition to the occupation of Kashmir

We make only one demand in solidarity with the freedom movement in Kashmir: End the occupation. Get the hell out of Kashmir. Self-determination for Kashmir.