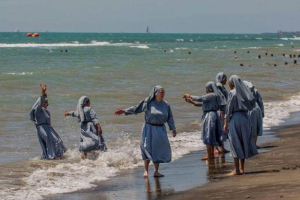 Today, France’s highest administrative court overturned the burkini ban implemented by 26 mayors along the Mediterranean coast. The international scorn & derision was getting too much for a country still reeling from the embarrassing presidency of Nicholas Sarkozy & sustaining the idiocies of Francois Hollande.

The overturn comes only a week after Manuel Valls, the prime minister (who once said more white people would give better image to a French city) described the burkini as an unpatriotic garment based “on the enslavement of women” which is “not compatible with the values of France & the Republic.” Democratic-minded people around the world breathed a sigh of relief at Valls’ dissociation of democratic principles from the practices of the French Republic.

The French government just couldn’t take looking like an ass anymore & cried “uncle.” The burkini ban will be forever known as the episode in French history that exposed what jackasses run the country. Weep when you realize that many of them, like Hollande & Valls, are rightwing socialist politicians.

(As a postscript to the story, the imam of Florence was banned from FB for a day for posting this photo of Christian nuns at the beach & suggesting a dialogue on the burkini ban.)