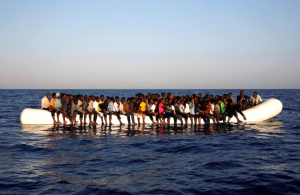 There is almost no news about the refugee crises either on the Turkey to Greece route or the Libya to Italy & Morocco to Spain routes. Remarkable when you realize that several European countries & Canada have military fleets in both the Mediterranean & Aegean Seas so the EU & UN know what’s going on.

What little we know is that France is violently razing refugee encampments, making thousands homeless. We know the traffic of refugees to Greece has slowed because of the military occupation of the Aegean Sea. We know at least 60,000 refugees in Greece are living in squalid barracks without sufficient sanitation. And we know that unaccompanied children are facing abuse & exploitation, especially in Italy.

The UN counts 3,167 dead on the routes but how they know that is questionable since hundreds are packed into dinghies like this one off the coast of Libya & their lives counted as of no great value. The distressing thing is that so many drowned when the European Union has high-tech aerial surveillance out there & several navies are patrolling the coasts.

When history is written, the Mediterranean Sea will be understood as one of the worst crime scenes in the late 20th & early 21st centuries. Let those who commit the crimes not be the ones who write the histories & let those histories include the epitaphs & trial transcripts of those who did commit them.

Immigration is a human right. Open the damn borders.
(Photo by Giorgos Moutafis/Reuters)