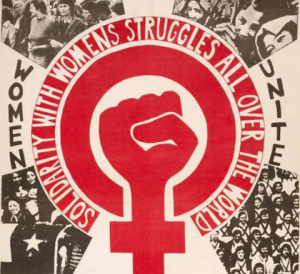 Reposting this (slightly edited) from August 27th, 2013 because it addresses “mansplaining” of women’s rights, now so in vogue; the political bankruptcy of opposing “identity politics” for those oppressed precisely for their identities; & the supremacist fetish that considers the preoccupations of European & US women as feminist & more important than the massive struggles & revolutions led by women elsewhere in the world.
*****
When the hell did slut-shaming become a theoretical concept in feminism? Why is it that male progressives & some socialists discuss feminism only in terms of porno & prostitution & slut-shaming? Why are they preoccupied only with prostitutes & not much with sweatshop or office workers or underpaid & unemployed women or the serious challenges to reproductive rights? Quite frankly, it’s not only a disturbing development; it’s outright creepy. Not to mention completely misogynist.

Feminists who object are told with insular stupidity that we are sex-negative & politically passé. But bucko, there’s another explanation for our protests. We don’t like when men, who quite frankly don’t know a damn thing about feminist history or theoretics, try to control the renewal of feminism that is erupting like wildfire by taking hold of the debate & channeling it into their pornographic notions of our sexuality & human potentials. Imagine people who call themselves socialists who can’t imagine a world without prostitution, where women’s bodies are not considered commodities to be bought & sold!

They chide the women’s movement for lack of intersectionality & then consider the racist slut walks of half-naked women promoting prostitution as the epitome of feminist activism. They laud FEMEN for showing up bare-breasted even though they’re chanting racist crap against Arabs & Muslims. They ignore the veiled Arab women leading revolutions in Yemen & Bahrain; the Egyptian women fighting for their place in Tahrir Square; the Mayan women taking on a corrupt regime for genocide & rape; the Dalit & other oppressed castes in India standing up against rape & sexual violence, & against land grabs; the mothers of Bhopal continuing to fight for over 30 years for justice for their children; Palestinian & Kashmiri women so central to the struggle for self-determination. What about them, bucko? Do they have to show up naked to get your attention or your approval?