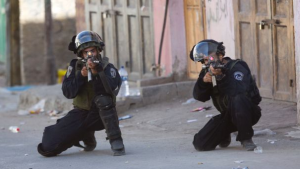 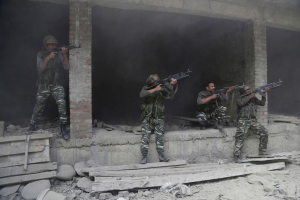 A UN report observed that in the past century civilian fatalities in war rose from 5-percent to now 90-percent & concluded that civilians are now deliberate targets, not accidental “collateral damage,” as the Pentagon likes to call it. That may not be borne out by history but it is beyond dispute that high-tech militarism is scorched earth militarism, ruthlessly indiscriminate in the carnage it creates–from massive human fatalities to cultural, social, & environmental ruin.

Military regimes are indifferent that millions of civilians, including children, are displaced, disabled, & killed by bombers & high-tech weaponry. The US made that explicit when Madeleine Albright, speaking for president Bill Clinton, said the deaths of 500,000 Iraqi children were “worth it” to achieve US strategic goals. Syria & Russia make that clear with indiscriminate bombing of entire cities in Syria. The Saudi-led, US & UK-backed coalition bombing Yemen make that clear as does the repeated US-bankrolled Israeli carpet bombing of Gaza.

What the UN has also observed–without lifting a finger to stop it–is that increasingly children are not “collateral” victims but the intended targets. Amira Hass wrote an article in Haaretz today about the deliberate kneecapping of Palestinian youth by Israeli soldiers in the West Bank. They intentionally shoot Palestinians in the legs to permanently disable them. The frequent military invasions of refugee camps aren’t just for harassment but missions to disable more youth. In the recent Israeli military rampage in Al-Fawwar refugee camp, they injured 40 young people with live ammo & rubber bullets, many of them in the legs. Most of the injured have inadequate medical & surgical options due to the occupation so they will suffer disability & pain all their lives.

Amira Hass isn’t talking through her hat. There is overwhelming documentation, including over a thousand Palestinians in Gaza who were permanently disabled & who lost limbs in the 2014 Israeli bombing siege. Since Israel also bombed most of the hospitals & clinics, those suffering amputations do not have adequate surgical & medical assistance.

Now we know the exact same barbarism is going on in Kashmir where hundreds of children & youth are permanently blinded & disabled from the current siege by the Indian military. Those who are disabled from pellet injuries face a lifetime of unbearable suffering.

Militarism in every one of its forms must be opposed. There is no such thing as a just or a humanitarian military intervention, especially conducted by the US Pentagon or by the Israeli & Indian armies. Those who claim there are either are lying through their teeth or are too stupid to comment about war.