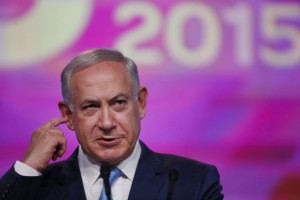 Perhaps this photo of Netanyahu in Washington, DC today should have a caption contest but he would so not fare well. He’s either picking his ear wax or giving the kookoo sign. In other photos he appears to be forcibly restraining unseemly noises. None of which go well with his customary deranged look. His only qualification for public office seems to be the psychotic qualities so apparent in his demeanor.

Media tells us he assured Obama he remains committed to a bantustate solution for Palestinians & tried to mend acrimonious relations with Obama about the Iran deal. Are we expected to keep buying this diplomatic charade? How long will they play the American people for stupid?

Obama knows damn well what Israel’s intentions are in Gaza, East Jerusalem, & the West Bank. He knows about the carpet bombing & blockade of Gaza, the targeting of small children, the extrajudicial executions in the West Bank & East Jerusalem, the incarceration of little kids for stone-throwing, the violent settlers who torch mosques & homes, the vandalism & expropriations of Palestinian lands.

Obama knows all about all that because the Pentagon bankrolls it to the tune of billions of dollars every year without batting an eyelash. The diplomatic charade is a good cop/bad cop scenario, a little psychodrama played out for affect. To the US, Israel is not a place where Jews can be free from persecution but it functions as an armed fortress against democracy in the Middle East–& democracy in the Middle East is a direct threat to US economic & military control of the entire region.

Our response to all this diplomatic treachery is to continue defending Palestinian self-determination by building the hell out of BDS, the boycott of Israel (barcode beginning 729).