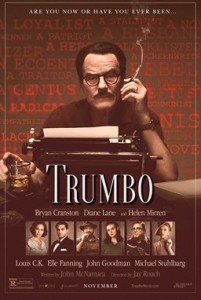 I’ve not read the book nor seen the film so cannot review the merits of either. But I listened to an interview on PBS with Bryan Cranston, the actor who plays Trumbo. Cranston seemed to have a sense of the contradictions of Trumbo’s character. He was an immensely wealthy guy who had a brief relationship to the Communist Party in the 40s when it had long been a political mess. Apparently he had one of those rah-rah for the workers complexes.

But he also had some character because when called before the House Un-American Activities Committee in 1947, he insisted on his First Amendment right to free speech & refused to answer questions about his politics or to incriminate others in Hollywood. Ten (known as the Hollywood Ten) were sentenced to six months to one year in prison for contempt of Congress. Trumbo served 11 months. They were then all fired by the studio bosses & blacklisted for a few years but continued to write under pseudonyms.

Trumbo was indeed a contradictory guy politically during the extremely contentious period of WWII & after his return from political exile. He was the screenwriter for the 1944 film “Thirty Seconds Over Tokyo,” a laudatory film about a retaliatory US bombing of Tokyo. He was also the screenwriter for the 1960 abomination “Exodus” about the myth of Israel’s foundation which portrays terrorist death squads driving Palestinians from their lands as freedom fighters. “Exodus” was a dreadful film & no testimony to his talents but it has a done a lot of damage as propaganda.

The film “Trumbo” isn’t likely to give much insight into the McCarthy witch-hunt which was a hell of a thing to go through even for a kid. It cast a pall over everything–especially in a household like mine where my right-wing mother got caught up & saw communists behind every liberal impulse. It was the hey-day of conspiracy thinking.

What’s important, less about Trumbo than the era, is understanding the role Hollywood plays in US politics–almost as an adjunct to the State Department–& the role the US government plays in Hollywood. Many insist Jews run the film industry & this explains the Zionist bias in so many films. There may be a preponderance of Jewish studio heads but that is not what’s driving the politics. We need to get straight that it isn’t Jews driving the pro-Israel politics in film so much as Zionists (of whatever religion or ethnicity) whose right-wing politics give them preeminence in the film industry. Essentially sycophancy to state power has its own rewards.

The US government came down like a ton of bricks on Hollywood during the Cold War & punished those it considered errant–even fairly conforming guys like Trumbo because he wouldn’t buckle on the Bill of Rights. That political environment prevails in Hollywood. If you want to work, you toe the State Department line–& the line today requires pro-Israel sentiments. In many regards, it’s not that different from many occupations where being a radical or gay can get you canned. Except that it’s the handmaiden of state power.

(Photo is poster of “Trumbo” film with Bryan Cranston.)