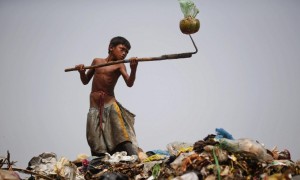 Neoliberal waste management in Cambodia: this is Seu, a 13-year-old boy who earns 25 cents a day scavenging the Anlong Pi dump site, the main landfill for the city of Siem Reap. In the US you can’t even buy a piece of candy for 25 cents; he’d have to work four days for a gum drop. In Cambodia he’d have to work two & a half days to buy a liter of water, five & a half days to buy a potato. And child labor may not even be the worst of this story.

Anlong Pi has become one of the pity stops on the colonial slum tour cycle & everyday bus loads of voyeuristic tourists show up from around world to snap photos of the scavengers. A lot of photojournalists show up too. One of the more obtuse who might better stick to photographing flowers said: “They can’t seem to understand that a better life is possible. In that world where Jasmine flowers cannot grow, nothing has any worth but the daily wage. Poisoned environment, rusty nails, or buzzing flies don’t bother them.” In what universe is that cement-headed photographer living!? Does he think poverty means you’re too stupid to distinguish the smell of flowers from rotting food & feces? “Buzzing flies don’t bother them”?

In fact, in 1998, when Taiwan dumped a mountain of mercury-laden toxic waste in Cambodia, residents began protesting & fled their homes en masse. Several hundred of them had fallen sick from mercury poisoning after scavenging. Cambodian government officials who had accepted bribes from Taiwan for the dump then arrested & imprisoned the two human rights activists who alerted residents to the danger. They were both charged with inciting riot.

This dumping of hazardous waste, including radioactive & hospital waste, is often illegal according to country laws. But there is an entire international industry built on it, not of mafia enterprises but multinational corporations. By bribing government officials, fraud, & flagrant criminal irresponsibility, plundering countries dump megatons of toxic waste in the plundered countries. There are established routes: the US to Mexico & Bangladesh; Japan to the Philippines; Hong Kong to China; Taiwan to Cambodia; Italy to Somalia, Nigeria, Lebanon; the UK & other European countries to Nigeria & other African countries. Just to cite a few.

Criminal irresponsibility is here indistinguishable from the most stinking malevolent racism & elitism that considers some human beings inferior & disposable. The only toxic waste dump worth a damn is the one where we quarantine neoliberalism, the barbaric, toxic phase of capitalism.