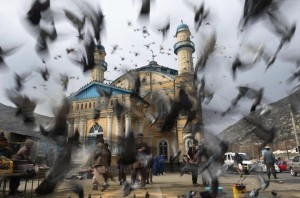 Media (& not just the lowbrow tabloids) are reporting the gruesome murder of a mentally ill woman in Kabul, Afghanistan yesterday for allegedly burning a copy of the Quran. It was such a monstrous crime that one wishes they could get the story straight. She was beaten to death by a mob, set on fire, & dumped in the river. Most accounts say she was also lynched. Was she lynched before she was beaten to death? Or after she was set on fire? Some accounts say the mob included “thousands” despite video evidence to the contrary.

The photo of the Shahi Doshamshira mosque accompanying the story seems to have no relationship to the crime except proximity & use value in war propaganda. Weren’t there other landmarks in the neighborhood? Why couldn’t they just describe the crime since it wasn’t ordered by the imam?

There isn’t much value in comparisons pointing out that of the fifty cities in the world with the highest homicide rate, none are in Afghanistan while the US has four. It’s not even useful to point out that according to the World Health Organization the cost of personal violence in the US is more than $300 billion annually. Violence is so routine here it no longer makes the headlines. Such comparisons, however, do not minimize the horrors of this crime against a young woman.

What’s not irrelevant is the $642 billion (only up to 2013) the US has spent in Afghanistan bombing the place to smithereens & terrorizing the people under the guise of emancipating women. Isn’t that beauty salon in Kabul working for them? Reportedly, Kabul police have arrested seven of the perpetrators. There weren’t over a thousand but there were several more than seven, including those psychos who took videos while the murder was going on. One only wishes media was as assiduous in reporting US war violence as they are in operating as crime reporters in Kabul.

Our deepest condolences to the family of this young woman. And our continued opposition to the US war in Afghanistan.