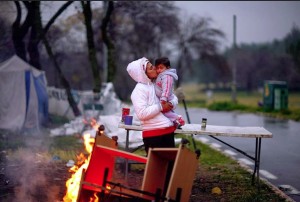 Feminists around the world engaged in the titanic struggles against female oppression, who fight the state for reproductive freedom, against eugenics, employment discrimination, & barbaric violence against women are outraged at media misrepresentation of the movement as a white, middle-class, elitist project to break something called the “glass ceiling.” Most women are trying to get out of the minimum wage classification. We’re outraged that radicals demean & attempt to turn feminism into a campaign to legitimize prostitution, porn, & naked protests. But mostly we’re outraged that governments attempt to use women’s rights to justify war & genocide & use Islamophobia as a key element in that campaign.

Right-wing feminists, many of them huddled behind MS magazine, attempt to portray US wars as a crusade to liberate women. It’s no accident that many of them are also Zionists. The struggle against racism & social hatred is part of feminism, not at odds with it. But reactionary forces, connected to power through the Democratic Party, try to associate feminism with elitism, Islamophobia & war. Those feminists who reject social hatred must wrench the movement back from those who use it to serve neoliberal barbarism.

Today, Zionists are boasting of advances for women’s rights in Israel because 28 women were elected to the Knesset. Do those 28 women have the same politics as Netanpsycho? Do they stand with women’s rights for Palestinian as well as Israeli women or are they also racist up to their eyeballs? Do they make the face of Israeli apartheid a kinder, gentler thing or do they oppose it? Where do they stand on the embargo & carpet bombing of Gaza & on the settlements in the West Bank?

Last week, Israel’s ambassador to the UN, Ron Prosor, gave a touching speech to the General Assembly on women’s empowerment. Well if would have been touching if he didn’t include snide Islamophobic slurs & didn’t lie through his teeth about the status of women in Israel. He brought up stoning & honor killings & asked “Where else in the Middle East do you see women’s empowerment like you do in Israel?” Does he mean because women soldiers carry guns & participate in occupying Palestine? Because if you look at the reality of women’s lives in Israel, you can see our man is talking through his ass.

In the speech that would have been touching if there was an ounce of truth to it, Prosor said Israeli women “didn’t just break the glass ceiling; they shattered it.” But statistics speak louder than baloney: they show that Israeli women at the executive level earn 30% less than males & among ordinary working women, 25% less. And that doesn’t even address unemployment among Palestinian Israelis, Ethiopian Jews, & African refugees due to discrimination. Overall one in five Israelis live below the poverty line, giving Israel the highest poverty rate & one of the biggest income disparities between rich & poor of all the plundering countries.

It’s the same story with reproductive freedom in Israel. Abortion is only legal under certain circumstances & requires the approval of a committee. That’s bad enough but in 2013 Israel admitted to giving Ethiopian Jewish immigrants birth control injections without their knowledge or consent, i.e., forced sterilization. As for prenatal care, for the past few years, Israel has been instituting austerity policies cutting back even more on social services–most importantly in health care for the poorest. With racism & ethnic cleansing as state policy, Bedouin Israelis are completely denied access to prenatal care, explaining their sky-high infant mortality rate.

There is one growth industry for women which Prosor didn’t mention: prostitution in Israel is a $500 million a year business. And homelessness is growing because Israel has a bloated military budget to sustain rather than build affordable housing.

So will the 28 women in the Knesset address the racism & misogyny of Israeli politics? Will they oppose apartheid, militarism, austerity, inequity, & genocide & forge alliances with Palestinians & African refugees against the regime? Because if they stand with apartheid, genocide, & neoliberalism, the barbaric phase of capitalism, who gives a damn what gender they are!?

This photo is an Israeli homeless woman & her child in Jerusalem, Israel (2012) where there was an encampment of homeless people.