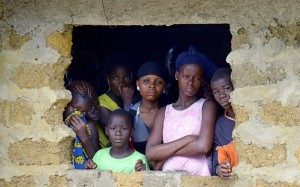 In this photo taken in Banjol, Liberia, neighbors of an Ebola victim watch medical workers carry away his body. There’s a lot of emotions written in their faces–from confusion to anxiety to defiance–& then there is the stench of death. Whole neighborhoods have been put under military lock-down but we see photos of crowds gathering within a few feet while workers suited in protective gear spray down the bodies of those who dropped dead in the road.

Media commenters express incredulity that Liberians are so distrustful of government & health officials & are rebelling against the forced quarantines. But what’s new about that? More importantly, what’s foolish about that given the racism of public health programs–especially those administered by US agencies? Well-heeled white parents in the US don’t trust ingredients in vaccinations & parents in Pakistan are refusing polio shots because they suspect nefarious CIA involvement. Women in many countries have every reason to distrust population control programs where forced sterilization is part of the package–or don’t those commenters know the score? The Gates Foundation is criticized in many countries, including Lesotho, because they undermine primary healthcare to dish out vaccinations to people weak from hunger whose systems can hardly withstand exogenous drugs in place of food.

The reported costs of fighting the Ebola epidemic continue to rise from $70 million several weeks ago to now $600 million. US & European officials announced they would commit $250 million. The Gates Foundation, who have given billions ostensibly to fight malaria & polio in African countries, gave a measly $1 million last month to UNICEF to fight Ebola. Curious because four years ago, Gates gave Liberia a $5 million grant for a recycling & garbage pick-up program. Just hours ago he raised Ebola aid to $50 million. Gates’s Microsoft co-founder Paul Allen gave $2.8 million to the American Red Cross last month to fight Ebola & donated another $100,000 to a matching fund. The problem is US health officials admit none of those funds have arrived in West Africa yet. The always thieving American Red Cross admits to dispersing only $100,000 & that for computer systems, not health services–which explains why people are dropping dead in the roads & in their homes & are not being cared for in hospitals.

Financial media–always the ones to put first things first–are concerned that quarantines are delaying mining projects & slowing rubber & palm oil output in Liberia, as well as cocoa, peanut, & rice production in Sierra Leone. The African Union objects to the border closures, flight bans & mass quarantines in West African countries. They claim they can’t send in more health workers because there isn’t enough protective gear & flight bans are making it difficult to get the protective suits. All that dough & they can’t figure out how to deliver gear after several weeks of epidemic. Meanwhile, according to a US health official, the Ebola epidemic is now “completely out of control.”

What’s also out of control is neoliberal plunder which extracts immense wealth from these countries & drives down the standard of living so that people get sick because they cannot afford food, much less healthcare. In many ways, the Ebola epidemic in West Africa is a replay of the cholera outbreak caused by UN troops in Haiti in 2010. They share all the same elements: corrupt regimes, neoliberal plunder, racism, treating human beings as dispensable.

Those of us who live in the plundering countries regret more than anything we have not yet sufficient political strength to stay the hand of plunder. It is our commitment to change that.