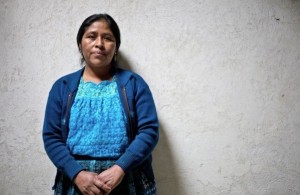 Meet the “terrorists” of Guatemala: Most of us were raised to believe Indigenous peoples were vanquished peoples–segregated & forced to hole up in reservations & backwaters on their way to extinction. Natural history museums were places we could gawk at pastiches of their pastoral but “primitive” lives sanitized of the violent colonial campaigns to exterminate them. In the US, a certain romanticism developed around having “Indian” ancestry (not too much, just a little) & sports teams & military systems were named after them. Demeaning was part of rendering them extinct.

It’s when neoliberal plunder came up against the remaining land rights of Indigenous peoples on every single continent that the world realized not only were they not on the brink of extinction, but they were in the front lines of the struggle for democratic rights & against environmental destruction causing climate change–from the anti-fracking movement in Canada & the US to opposing mining operations & agribusiness plantations in Africa, Latin & Central America, South Asia, Australia.

In 2004, Goldcorp, a Canadian mining corporation from Vancouver, BC opened up the Marlin gold & silver mine consisting of two open pits & one underground facility in the highlands of western Guatemala. The Mam & Sipakapa Mayan nations living on the two extremities of the mine protested they had not been consulted before work began on the pit (as required by Guatemalan & international law) & that their land was simply expropriated by the government for Goldcorp. The Sipakapa nation filed a formal legal complaint with the World Bank. But of course, most of the billions of dollars worth of mining investments around the world are orchestrated by the IMF & bankrolled by World Bank loans. The Marlin mine got a US $45 million loan as part of the neoliberal “push to develop the natural resources sector across Latin America.” The World Bank concluded the Sipakapa complaint had no merit. The fox guarding the chicken coop writ large–or more aptly, made parody.

The Mam & Sipakapa nations are also protesting ecological & epidemiological problems from the mine. Gold & silver are extracted using explosives & processed using cyanide leaching. The local residents engage in subsistence farming of corn, beans, vegetables, & fruits irrigated by the local river & its tributaries. Activists claim the mine has contaminated water sources they use to irrigate their crops & for human & livestock consumption with arsenic & copper effluvia. They also say the subterranean mining explosions have caused houses to collapse. Although Goldcorp & the government are playing fast & loose with the equivocal conclusions of a two-week ecological study commissioned by the Catholic archdiocese in 2009, residents point to skin & neurological diseases as evidence of heavy metal poisoning. But you don’t have to do one more redundant study to verify what has been known for decades about the efflux contamination of mining operations. Cyanide leaching is common practice in mining facilities & mining officials damn well know the problems.

This Mayan woman is “Doña Crisanta”, a leader of the anti-mining movement in San Miguel Ixtahuacán. Anti-mining activists are called terrorists & enemies of progress by the Guatemalan government who, in cahoots with mining company goon squads, employ assassination, incarceration, intimidation, criminalization, & mass rape against them.

Guatemala’s president Otto Pérez, who served as a general in the 30-year civil war which massacred 200,000 Mayans, attends the inaugurations of new mines in all parts of the country despite protests by local Indigenous nations against the crimes of mining company goon squads. He’s also making sure fellow general & former dictator Efrain Rios Montt eludes justice for the charge of Mayan genocide. Otto Pérez is another punk who’s gonna have to bite the dust.

Our fullest solidarity with the “terrorists” of Guatemala.