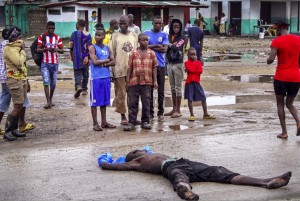 This is neoliberal healthcare in Liberia, a country in West Africa homesteaded by former US slaves in hopes of creating a better world. But when the elite eventually hitched their fortunes to US militarism & neoliberalism (the barbaric phase of capitalism) they entered the twilight zone & this is the catastrophic result for working people.

This man dropped dead in the street–likely from the Ebola epidemic raging in the country. Could a society render a man more indignity because, as we can see from people standing around, there is a stench to death? And because they’re afraid of contacting Ebola, he is forced to die not just with indignity but alone & untended.

Liberia’s president, Ellen Johnson Sirleaf, is a Harvard-educated banker who won the Nobel Peace Prize in 2011 for her “non-violent struggle for the safety of women & for women’s rights to full participation in peace-building work.” Well bully for her! Just like Obama of a dozen wars won the damn thing. Sirleaf calls herself the “Iron Lady” for making the hard decisions–like allying with US foreign policy; incarcerating a journalist who reported on government corruption; opening Liberia to foreign corporate investment, bribery, & back-room deals (in particular oil companies to develop Liberia’s oil reserves); flagrant nepotism in appointing family members to key positions in government & the plunder operations; allowing 8,000 UN “peacekeeping” troops in Liberia (since 2003).

“Foreign investment” (i.e., neoliberal plunder) has continued to grow since Sirleaf took over in 2006. In that time the US has contributed over $16 billion in “bilateral assistance” (i.e., weaponry & bribery) to Liberia. Sirleaf claimed in an interview that this economic growth included expanding education & healthcare institutions as well as infrastructure like roads & power. How does she explain this man dying in the unpaved street? How does she bullshit around the complete lack of medical facilities in West Point, the slum epicenter of Ebola in the capital city of Monrovia? Is it possible “trickle-down economics” don’t work any better in Liberia than they do in the US–or even worse?

“Give us four more years & the results of all of this growth will be felt,” Sirleaf told an interviewer in October 2013. It took less than a year for the Ebola epidemic to expose the utter political bankruptcy of dancing with the devil of neoliberal predation & of placing private fortune over fundamental human needs like education & healthcare. But all this comes as no surprise to the working people of Liberia who consider their country the most corrupt on Earth & who have every compelling reason in the world not to trust their government’s methods of dealing with the Ebola epidemic.

May our brother, whose name is not given, RIP.