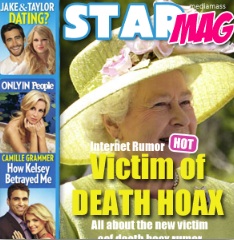 How distressing to read today that Betty Windsor had croaked & that the “R.I.P. Queen Elizabeth II” FB page got nearly one million new ‘likes’. The question came to mind: were the million new fans lauding the news or expressing condolences? So it was heartening to know hundreds of royalists & their retinues of servants lined up to write messages expressing their sadness to Phil the Flatulent & the regrettable Windsor progeny. The Twittersphere was also understandably frenzied at the news so there were condolences galore.

Now we hear the whole thing is a bloody internet hoax & Betty is in her usual box at the horse track with Cammy. When she was informed of this joke at her expense, she handled it all with grace & simply ordered £8 million be deducted from education funds & transferred to her personal account. No unseemly beheadings were involved as was wont with her ancestors.

Well now if that’s a hoax, does that mean the tabloid story that KKKKaty & Betty are at war might also be a prank? And is it also false that Cammy & Chuckles are having a baby? If the tabloids keep this pranking up they’re going to become as preposterous as Israeli war propaganda where you lose all credibility. It’s a slippery slope.