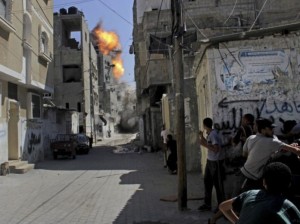 These people in the street must have gotten their automatic telephone call from the Israeli military telling them to evacuate so Israel could blow up their houses. Actually what Israel is bombing here is the refugee camp in Rafah. Of course as we know from umpteen numbers of other photos, these people in the street are sitting ducks for those bombers. And still there isn’t a peep out of the UN & all those human rights NGOs about war crimes. Is it possible their silence is consent to genocide?

We wonder if the psychos in the hills of Sderot are still there cheering on ethnic cleansing since there aren’t any recent photos. Perhaps the hasbara factory finally smartened up & told them to scram since it doesn’t look good to claim you’re cowering from Hamas rockets if you’re sitting right in the line of fire & making an international spectacle of yourself–& a shameful one at that.