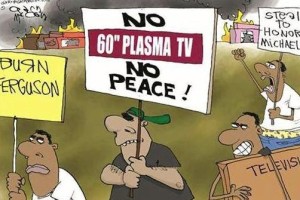 Loath am I to post this repugnant meme from the Facebook wall of a Zionist group (Israel’s Voice) but it goes right to the heart of the fatal political flaw of Zionism: racism. While Palestinians rendered solidarity & Buddhist monks from Tibet flew from India to stand with the Ferguson Black community, Zionists were posting this trash.

It is not only repugnant in its racism but profoundly saddening because Jews around the world long played a central part in social justice in disproportion to their numbers–until Zionism corrupted so many. For decades in the US, socially conscious Jews (religious & secular) were central to the socialist, labor, women’s, & civil rights movements.

Many feminists, including especially Betty Friedan & Phyllis Chesler, have distinguished themselves in the rancidity of their Zionist apologetics. Chesler, who is a windbag, has simply gone off the deep end in her hatred & now spends her senior years writing scurrilous tracts ad nauseam. Combining hatred with flatulence has not served Zionism & has made her even less readable than the psychology books she used to write. It’s probably not an accident that many of these same women played key roles in railroading the independent women’s movement into the Democratic Party.

Zionism teaches social hatred & divides human beings on the basis of superiority & inferiority. That’s why it’s destined for the rubbish heap of history–because hatred is an exhausting emotion. Zionism has run roughshod over human solidarity for far too long.