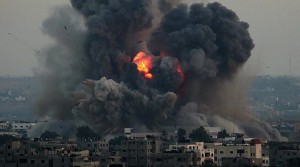 There have been Palestinian solidarity protests reported in 50 cities around the world (if you count a lone picketer in McAllen, TX). Some have been “small but spirited”; some have been immense, numbering in the thousands. Eleven of those were in the US, though there were certainly more rallies unreported. These protests have to continue, have to grow, have to reach out & involve everyone under the sun demanding “Stop the massacre in Gaza.”

Organizations wishing to endorse and take part in this action, contact Don Bryant at 216.285.0223 or don@immigrantsupportnetwork.org

Everybody on the East Coast & east of the Mississippi River should consider finding a way to this rally & know it is an honor to support the people of Gaza in their struggle.

This is a photo of Israeli bombing in Gaza City where over half a million people live. There’s no way Zionists can put the soundtrack to “Exodus” to this carnage. “We Shall Overcome (for Palestine)” by Roger Waters is the only suitable anthem.