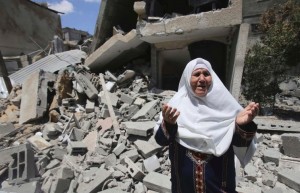 Once again, rubble tells the story media ignores. This woman in Rafah is standing in front of what’s left of her house destroyed by an Israeli bomb. You can see it’s a congested area with other houses right up close to hers & you can see they’re made of concrete. So when Israel bombs them under the pretext of taking out Hamas rocket launchers, concrete ceilings & walls collapse on the inhabitants, causing the most gruesome & debilitating injuries.

Israel thinks it’s being foxy with us when it reports they dropped leaflets to warn residents to flee. Consider the options: do Palestinians run into the streets for safety while Israel is bombing everything into smithereens? After Israeli politicians referred to their children as “little snakes” & urged genocide, would any Palestinian parent in their right mind read the leaflet, gather up their kids, & head for safety in the streets? Anybody who buys this genocidal rubbish has to have their head examined.

That Hamas rocket launcher alibi is being worked to death by Israel, by media, by every stinking proclamation coming out of the US Congress & other governments. It’s the essential weapon In Israel’s propaganda arsenal & still the evidence is only hearsay. We search fruitlessly for photographic documentation of rocket barrages from Gaza. And what we find wouldn’t hold water in small claims court. What we find is overwhelming documentation of Israeli human rights & war crimes against the people of Gaza–even though the UN & Human Rights Watch (HRW) won’t acknowledge it.

Of course, when the UN & HRW refuse to see egregious war crimes, that isn’t a case of cognitive dissonance; it’s a case of collusion. To render Ezekiel from the Old Testament apropos: “They have eyes to see but turn their heads & ears to hear but play stone-deaf, for they are an unconscionable people up to their eyeballs in this genocide.” Amen.

Protests in solidarity with Gaza continue around the world, with one in Paris, France today sponsored by dozens of labor unions, peace, veteran, farmers, student, women’s groups–a show of solidarity in a country that until recently arrested boycott (BDS) advocates & dragged them into court. There was a massive rally held in Cape Town, South Africa today & another in Baramulla district, Kashmir. And there is a national rally scheduled for Washington, DC this Sunday.

There’s no such thing as overkill when it comes to solidarity against genocide. Stand with the people of Gaza & if it’s not possible to join a rally, it is always powerful to join the economic boycott of all Israeli products (barcode beginning 729), support the cultural boycott of Israel, & demand “No military aid to Israel!”