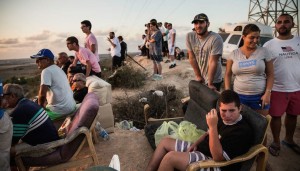 Israeli propaganda has gone to the next level, as they say–from bald-faced lies to science fiction. It’s on a par now with the guys who claim space aliens built the pyramids. It’s one thing to get nailed claiming traumatized residents of Sderot, Israel cower in terror in bomb shelters when photojournalists show them sitting in lawn chairs & moving in furniture to watch Israel slaughter thousands of Palestinians. It’s another level of deceit to claim the Israeli military is taking out Hamas drone aircraft. But there’s no shame in hasbara-land & the Israeli military reported an unmanned Hamas aircraft was taken out by a Patriot surface-to-air missile along the southern Israeli coastline near the city of Ashdod.

One doesn’t know who the Associated Press is talking to in Hamas since they don’t name names, but they report Hamas acknowledged it has drones in its arsenal, claimed it launched three yesterday (two have disappeared in fairy land), & have developed one type of drone for surveillance & one for delivering munitions. And as they used to say, if granny had wheels, she’d be a Ford.

The whole shebang would be a burlesque except that millions of people read this stuff & think it’s reality–& all of this crap is to justify ethnic cleansing.

We keep the people of Gaza in our hearts, along with our grief about what they are sustaining, but there is a deeper understanding now of how malignant & profoundly corruptive Zionism is to its adherents. Like every other form of racism, it creates sociopathology, emotional & spiritual hollowness incapable of human empathy.

Supporting Palestinian intifada, standing with the people of Gaza is the duty of all who believe in a just & humane world & it is the only possible liberation from the stranglehold of Zionist hatred.

(Photo of Israelis in Sderot, Israel watching the slaughter in Gaza by Lefteris Pitarakis/AP)