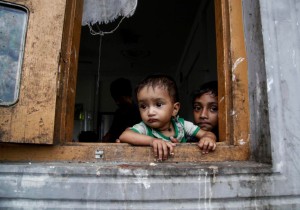 Thoroughgoing critiques must be made of what electoral democracy has become & what elections are all about. Nothing showcases that better than the farce & chicaneries of US presidential elections. But nothing makes it more imperative than those many regimes where a military junta steps back from direct rule & allows elections & quasi-civilian rule.

Tomorrow, Myanmar (Burma) will hold elections being lauded as “historic,” “landmark,” & the “best chance for free & credible elections in 25 years.” The candidates for president are incumbent Thein Sein, a former general, versus Aung San Suu Kyi, the Nobel Peace Prize winner. Myanmar has a system like the US or Mexico where the president heads the government, not the prime minister. The military ruled directly for nearly 50 years–until 2010 when they decided to rule behind a facade of electoral democracy.

One potential problem in these “free & credible” elections is that the junta made a law specifically designed to keep Suu Kyi out of the presidency even if she wins. It isn’t a problem to the junta since the last elections they called in 2010 & 2012 (which elected Thein Sein) were massively fraudulent according to international observers. They can steal another election just as easily & since there is no democracy or judicial system in the country, they can throw those in jail who object. If things really get out of hand, they can reinstitute direct military rule.

Suu Kyi, who media calls an “opposition leader,” has demonstrated over & over again her willingness to play ball with the junta & its neoliberal austerity & development plans. With insuperable arrogance she claims she will be “above the president” if her party wins the election. She’s not stupid but likely believes her fame & international stature will protect her & also understands Myanmar needs foreign investment jeopardized by direct military rule.

People in Myanmar can go to Suu Kyi’s rallies (that looks good in international media), but according to Amnesty International, “a targeted crackdown on freedom of expression & the right to peaceful assembly has only intensified” during the election campaign.

Which of the two candidates wins isn’t the central dilemma in the elections because there’s very little of substance they disagree about. The heart of Myanmar politics, including these elections, is the ethnic cleansing of Rohingya Muslims which has reached genocidal proportions. Since Rohingya are denied citizenship, all 1.5 million of them will be denied voting rights–along with 2.5 million people from other ethnic groups.

Suu Kyi is absolutely shameful when asked about the persecution of Rohingya. She’s criticized for her silence when she should be excoriated for her collusion. When asked recently by a reporter for “Sixty Minutes” on CBS, she was evasive & coy about their persecution but at a press conference last week in Myanmar she said “It is very important that we should not exaggerate the problems.” The UN also plays coy when it comes to Rohingya genocide but a human rights clinic at Yale Law School published a legal analysis that found “strong evidence” of genocide against Rohingya.

The evidence isn’t merely “strong”. It’s overwhelming & completely damning: violent pogroms against Rohingya–murdering them & torching their homes; concentration camps where 150,000 are detained in squalid, subhuman conditions; thousands fleeing for safety to refugee camps in Bangladesh & Thailand; thousands risking their lives this year to escape on rickety boats without food & water.

The photo is Rohingya Muslim children at a clinic in one of the concentration camps in Rakhine State where most Rohingya live or lived. Take a look at the quality of health facilities offered.

To the forces of Rohingya justice, quite frankly it doesn’t matter who wins the Myanmar elections.

Our fullest solidarity with Rohingya Muslims against genocide in Myanmar.