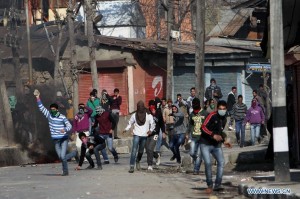 A Palestinian protest in the West Bank? In fact, it’s Kashmiri protesters in Srinagar going up unarmed against Indian paramilitary thugs. The similarities between the two struggles are striking & not just in barbarism nor accidentally so. The struggle in Kashmir which also involves stone-throwers against tanks & semi-automatic weapons is often called the “Kashmiri Intifada.” Both conflicts derive originally from British colonialism but now play a central role in international politics. Neither is just a dispute over real estate.

Kashmir is not a political matter only of concern to Kashmiris & India & just of remote concern to the rest of us. The US funds India to the tune of millions of dollars a year for military (including nuclear arms), economic, & other purposes to foster India as a regional ally. In 2014, the US gave India over USD $3,228 million. Between 1946 & 2012, the US gave $65.1 billion to India & during the same timeframe gave $65 billion to Israel. That makes the US party to the occupation of Kashmir & that relationship needs to be investigated, exposed, & publicly opposed.

Israel has its own long-term relationship with India including billions of dollars in arms deals. It is also involved up to its eyeballs in counterinsurgency training in Kashmir. Drawing on decades of brutality against Palestinians, Israel has become the master of occupation & terrorism. The entire nefarious labyrinth of collusions needs to be investigated, exposed, & publicly opposed.

It isn’t just an affinity in barbarism the three regimes share but the international role they are playing as partners in maintaining exploitation & massive inequality all over this planet. And that needs to be opposed.

One of the best ways to forge solidarity is to hold forums where Palestinian & Kashmiri speakers can tell their stories of occupation against common enemies. This becomes more imperative to answer the increasing Israeli attacks on free speech in countries around the world. Such solidarity will not dilute but only strengthen the struggles in both Kashmir & Palestine.

(Photo from 2013 protest by Javed Dar/Xinhua)