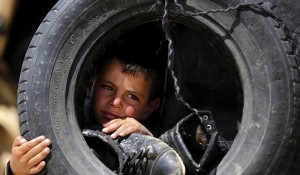 The Oslo Accords (signed in 1995) were one great big snow job at the expense of the Palestinians & appropriately considered by many (including Edward Said), even at the time, as a document of surrender. The Accords legitimized a bantustate solution & divided the West Bank into three administrative units, Areas A, B, & C, according to how much self-government Palestinians are allowed by Israel. The Area A, B, & C stuff is in part a legal fiction since Israel occupies all of the West Bank but Area C is the one Israel controls lock, stock, & barrel. Israel uses that complete control as a means of more aggressively expropriating Palestinian lands. According to the UN, over 350,000 Zionist settlers now inhabit over 200 settlements & outposts in Area C.

Last year, Amira Haas, the remarkable columnist for Haaretz (who lives & reports from the West Bank), reported on a meeting between Knesset politicians & representatives of settlers from Area C. They all agreed on the goal of clearing Palestinians out of Area C & forcing them into Areas A & B. The methods they discussed to clear out Palestinian communities, who they referred to as “weeds,” was designating districts as live-fire zones & conducting military exercises on them; declaring Palestinian land as Israeli state land (& then using it for settlements); refusing to connect Palestinian communities with water or electricity; evictions & forced transfers of residents; destroying water wells & solar panelling; denying Palestinians, who are mostly farmers & shepherds, access to grazing & farm land; refusing construction permits to repair or rebuild homes or construct health & other public facilities.

In 1983, Israel (in league with the World Zionist Organization) established the settlement of Susya just south of Hebron & within Area C on lands that belonged to the Palestinian community of Khirbet Susiya. Several other settlements have also been established in the area. Khirbet Susiya is one of at least thirty Palestinian villages under threat of demolition in the area & has been under siege for decades by violent settlers, Israeli soldiers, the Israeli administrators of Area C, & by the Israeli courts who repeatedly issue demolition orders.

One of the ruses Israel used to clear Khirbet Susiya is that it’s the site of an archaeological dig where they unearthed a synagogue. Even if they did unearth the ruins of a synagogue, Israel has no more right to the site than the ancient Babylonians do–or the Edomites, the Philistines, or the Canaanites who also inhabited ancient Palestine. This is just another episode in the invented people of Israel creating a mythological past to justify modern colonialism. Zionist writers have referred to the people of Khirbet Susiya as squatters & as an imaginary village but they can’t explain why there are mosques in the region & why they have to dig all the way to Argentina to find a shard that might be a synagogue.

Israel wants to outright annex Area C–which is why they’re expanding the settlements & linking them to Israel with a network of roads but denying all development to Palestinians & attempting to force them to move. The Israeli courts have once again issued a demolition & removal order for all the residents of Khirbet Susiya.

(Photo is child in Khirbet Susiya by Abed Al Haslhamoun/EPA)