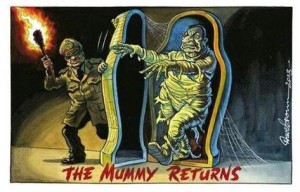 Mubarak has been acquitted in an Egyptian court. Golly is that a surprise. About as surprising as the acquittal of Guatemalan butcher José Efraín Ríos Montt in 2013. About as surprising as the grand jury verdict on the killer cop in Ferguson. After all, Pinochet never faced justice. Nor did Omar Suleiman. And neither has Kissinger. Some of the most loathsome creatures to ever walk the planet.

One media headline says, “Mubarak’s Acquittal Signals Complete Triumph of Military Over Arab Spring.” It is indeed a mighty setback to the Egyptian uprising against tyranny & may demoralize activists for a while because they fought so hard only to return to square one. It doesn’t help that so many political nut cases denounce the entire uprising as CIA-orchestrated street theater–“the Arab sting.”

Many will draw fatalistic conclusions & consider it pointless to stand against tyranny. Those many need to draw heart from Palestinians who for the first time in 66 years of struggle no longer stand alone. The most important lesson to be drawn from the setback in Egypt (the forces of social transformation do not accept the notion of long-term defeat) is the need for international solidarity. The outcome in all of the Arab uprisings would have been completely different if US working people had been up off their knees.

The solidarity now forged between Ferguson & Palestine is a development of the greatest consequence not just for Black power in the US & Palestinian self-determination but for the future of Arab resistance to US-backed tyranny & for all of the oppressed around the world. The bonds of solidarity are the only force able to counter tyranny.

Despite this setback, we stand with activists in Egypt & hope we can stand stronger when their movement again emerges to take down tyranny once & for all.