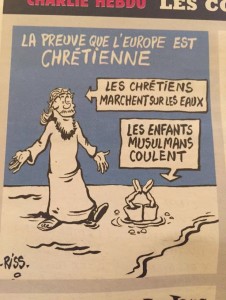 What puts defenses of Charlie Hebdo to shame is that when they were brutally assassinated last January we were supposed to do that “Je suis Charlie” schtick and go all alligator tears. Even though for years they had been producing inflammatory cartoons against Muslims in a political climate repressive & violent toward Muslims. Some could interpret that as sucking up to power.

If cartoonists had come up with this kind of crap while their families grieved they would have been vilified from here to Kingdom Come. Twenty-five thousand refugees & immigrants have drowned in the Mediterranean in the past several years. Hundreds only yesterday. Baby Aylan Kurdi’s father is bereft with grief at the loss of his wife & two boys–two of whom he can’t even bury because their bodies are not recovered. And Charlie Hebdo chose just this political moment to do a “satire” on the European response to the refugee crisis?

Photo is second cartoon CH did on the refugee crisis. They would be advised to put “satire” behind them & move openly to war propaganda.