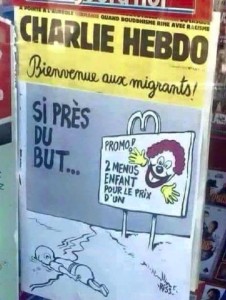 We’re not going to rehash that Charlie Hebdo debate that goes nowhere about the character of satire. Either you get it or you don’t & those who do aren’t much inclined to quibble with the obtuse over whether CH’s racist pickaninny portrayal of African refugees is actually insightful social criticism. You can’t–to be frank–reason with white supremacy.

The thing about satire–the art of mockery–is that it’s so versatile. It can be lowbrow or highbrow. It can have vulgar farting & sexual bawdiness like Chaucer or picaresque fantasy & goofiness like Cervantes; it can be lacerating in social criticism like Jonathan Swift & Brian O’Nolan or completely apolitical like Month Python. It is often iconoclastic, nihilist, & cynical but it is also always funny & at its heart it is profoundly moral because it ridicules & vilifies social folly even if bereft of hope that things can ever be better.

Political cartooning is the most democratic art form, emerging in the 17th & 18th centuries with the democratic revolutions that overthrew feudalism & brought in capitalist nation-states. It’s a democratic genre because it indicates a change in power relations by the ability to lampoon power without being guillotined. The obsequious posture of serfs is replaced with the defiance & ridicule of free-born workers.

Regrettably, racist caricature has always been part of cartooning (except perhaps Daumier) because colonialism is a political feature of capitalism from its earliest days. Blacks, Jews, Arabs came in for the worst of it in European & US caricature. The simian portrayal of Irish shifted to the simian portrayal of Blacks that was used to incite violence & social hatred & stigmatizes caricature to this day–including of Obama & elite athletes. Unfortunately the racism led political cartooning to cooptation by the ruling elite so that, as an example, Dr. Seuss was drawing racist caricatures of Blacks, Arabs, & Japanese for commercial ads & WWII war propaganda.

So what does all that have to do with Charlie Hebdo & this recent blasphemy mocking the death of baby Aylan Kurdi–which offers a McDonald’s Happy Meal over the body of a child & says nothing about the barbarisms of EU refugee policy? In brief, because it is gratuitous & not just bereft of humor but of respect for anything. It is simply pornographic with amorality. And to what purpose? Only to show they hold nothing sacred.

When you hold nothing sacred there really is no need for satire, is there? When you skewer drowned infants rather than the abuse of power or human folly you are not longer producing satire but its parody in the service of social hatred. Charlie Hebdo wants us to gasp at their audacity when we are appalled more by their cruelty & complete lack of humor.

(Thanks to Lisa Forman for sending me this photo)

PS: This is the last post I hope I will ever do on this despicable piece of political rubbish.