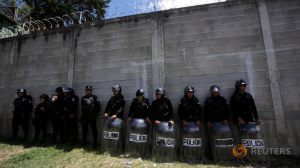 It’s been nearly a week since the fire in the Virgen de la Asuncion detention center for youth near Guatemala City but the smoke still hasn’t cleared on what really happened. Media is calling the place a home & a youth shelter, even a safe house, but it was an overcrowded hellhole, a penitentiary where they warehoused troubled & delinquent kids with those who had been abused. In the context of Guatemalan justice for working class kids, even those designations need to be interrogated. Everything about this story has to be interrogated & we need to hear from Guatemalan parents, survivors, & human rights organizations.

The fire was in the girl’s wing after they had tried to break out en masse to protest conditions & abuse at the prison, including charges of rape. Apparently the fire was caused by mattresses set on fire after the girls were locked in. So who set the fires? Did the inmates even have access to matches? Who locked them in? And why did they move in riot police rather than grief counselors when parents thronged to find out what happened to their daughters?

So far 39 young girls have died & at least 19 are being treated for burn injuries so severe & grisly that a doctor treating them described it as a scene from Dante’s Inferno.
The state-run penitentiary behind a 30-foot wall has long been criticized for housing 800 in a facility built for 500; for unsanitary conditions & rotting food; for physical abuse of the inmates & for rape. Guatemalan officials will now have to cook up a story to cover their own asses & it is already beginning to emerge from the ashes of their crimes against children.

They will talk about those delinquent boys, allege they were gang members to set off a Pavlovian response akin to claiming they were “jihadi terrorists.” But the girls were warehoused in a separate wing from the boys. So how will they pawn off the story that the boys were responsible? Responsible for what? The overcrowding? The filthy conditions? The decaying food? The rapes & beatings? For sticking kids with problems in an institution rather than providing humane social services for them?

It’s a damn good thing Guatemala has strong human rights organizations & combative activists schooled in the struggles against dictatorship & genocide. We extend our fullest solidarity to them, the parents, & survivors in getting to the bottom of this monstrous crime against children.

Our condolences to the families of those who died. May their daughters Rest In Peace.

Photo is Guatemala’s concept of grief counselors outside the “safe house” where children were raped by prison authorities.