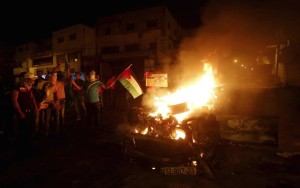 Media neglects to report on Israeli settlers torching mosques & homes in the West Bank but is making a big deal over Palestinians torching this empty car owned by settlers who were trying to take back a funerary monument near Nablus in the West Bank called Joseph’s Tomb. Several days ago, a group of Palestinians also tried to torch the cenotaph itself & this is being condemned from here to Mars as a desecration of a Jewish holy site. Is it holier than Al-Aqsa mosque to the Palestinians which Israeli police are helping extremist Israelis destroy?

Judaism’s claims to the site of Al-Aqsa hang by a Biblical thread exploited by Israeli propagandists who invented a religious tradition that does not exist for a people invented by colonialism. Not even a thread exists for Joseph’s Tomb. It’s a complete fabrication of recent vintage.

There’s no need to address the historicity of the Bible, disputes among Biblical scholars & archaeologists, or to elaborate the lengthy odyssey of Joseph. The basic narrative is that Joseph was a Hebrew kid sold into slavery by his brothers & who then rose to prominence in Egypt. When Moses led Israelites out of slavery in Egypt–the exodus story–Joseph’s bones were exhumed & carried by Moses so he could be buried in his hometown.

The Exodus story is the founding myth of the state of Israel in 1948, portrayed in the 1960 Hollywood movie “The Exodus”–a noxious & tedious romanticism of terrorism that even Paul Newman & Sal Mineo could not salvage. Once again, we needn’t challenge the historicity of the Bible but archaeologists find no evidence supporting the Exodus, let alone burial of Joseph’s bones near Nablus–Biblical events from several centuries BCE–& many have abandoned pursuit of archaeological evidence. His bones aren’t there.

No Jewish or Christian sources mention Joseph’s Tomb prior to the 5th century & the cenotaph standing now was built in the 19th century. It’s been a source of dispute between other religions but only between Israel & Palestinians since Israel occupied the West Bank in 1967 when Israel forbade Muslims from worshipping at the shrine & turned it into a Jewish prayer room. After the Oslo Accords in 1993, it came under the jurisdiction of the Palestinian Authority which allows Jewish “worshippers.”

The issue is not Bible as history but Bible as Israeli politics to invent Jewish religious traditions in Palestine where they do not exist & efface Palestinian history, culture, traditions, & rights.

Palestinians torched Joseph’s Tomb, not as an act of desecration but an assertion of political rights over the occupied West Bank & over the shrine. The incident happened when Israeli settlers tried to enter the shrine without authorization & Palestinian Authority police handed them over to the Israeli army. Only a fool would believe settlers entered the shrine to worship when Israeli soldiers are taking tear gas, live ammo, & grenades after protesting Palestinians in the same area. That’s called a provocation. Just like at Al-Aqsa.

Build the economic, cultural, & academic boycott of Israel. Continue emergency rallies all over the world in defense of Palestinian freedom of religion, to end Israeli violence, & to end the occupation.