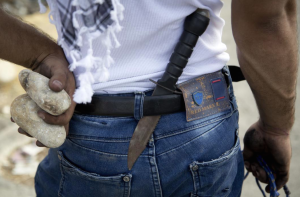 This is one slick piece of propaganda. Israel is deploying thousands of extra troops into the occupied West Bank, adding hundreds of extra police in occupied East Jerusalem, & encouraging vigilantism among armed Israeli settlers. It must be quite a spectacle to see such massive military force using tanks, grenades, live ammo against unarmed Palestinian protesters. But media chose this photo of a Palestinian in the West Bank armed with a slingshot, rocks, & a knife to document their hysterical headlines: “Terrorist stabbings have Israel on edge.”

The knife has replaced Hamas rockets as justification for shooting down & executing Palestinians. Mark Regev, the Australian-born spokesperson for the Israeli government, claims 30 knife attacks by Palestinians with 8 fatalities & “scores of injuries” since October 1st. He explains the 37 Palestinians shot dead by claiming half of them were knife assailants. It would be good if Regev could detail for us all 30 attacks since only about five have been mentioned in media–the same five ad nauseam. Is there any correspondence between the 18 or 19 alleged Palestinian assailants shot down & the stabbing scenes in Jerusalem? Or were most the of Palestinian fatalities shot down in the West Bank as they protested unarmed against armed vigilante settlers & the Israeli army?

A coalition of human rights groups (including Amnesty International) who CNN refers to as “supporters of the Palestinian cause,” issued a joint statement saying Israeli officials “have openly called for the extrajudicial killing of suspects.” They should be shouting that from the rooftops to counter Israeli propaganda.

Regev meanwhile is blasting Mahmoud Abbas (the un-elected president of the Palestinian Authority who usually runs interference for Israel) for not doing enough to stop the alleged stabbings. Abbas responded in a televised speech that Israeli attacks “threaten to ignite the fuse of a religious war which will burn everything, not only in the region (but) perhaps in the entire world.” Makes you wonder which planet he just flew in from.

Israeli policy allows demolishing the homes of alleged Palestinian assailants even if the accused have been executed & children still live there; Israeli soldiers are now allowed to shoot down rock-throwers, including children. The Israeli defense minister just asked a special meeting of the security council if they should now start confiscating kitchen knives from every home in East Jerusalem. No matter how sarcastic, the suggestion indicates the reign of terror against Palestinians will crescendo.

It doesn’t matter how many Palestinians are carrying knives because the oppressed have a right to defend themselves against military occupation & armed vigilantes by any means necessary.

Build the economic, cultural, & academic boycott of Israel & demand no aid of any kind to Israel.