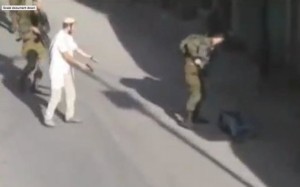 Sometimes when you read the news, especially about Palestinians, you think media must hire those who flunked out of Writing Skills 101 because you can’t make head nor tail out of what happened. There’s ‘no there there’ to the half-assed narratives. Then, in a progression from credulity to jaded wisdom, you realize they deliberately mangle the story–sometimes in grotesque but always in dishonest ways.

The lengthy Associated Press caption to this photo read: “Jewish settler holding his pistol after he shot & killed a Palestinian man is seen in this still image taken from a video shot by Youth Against Settlements & obtained by Reuters TV, in the West Bank city of Hebron October 17, 2015. Three Palestinians were shot dead on Saturday in what Israel said were thwarted knife attacks, but a Palestinian witness of one incident said it was a result of Jewish settler violence, as tensions ran high after more than two weeks of unrest. The shooting occurred near a Jewish settlement in the West Bank city of Hebron. The Israeli military said a Palestinian attempted to stab an Israeli civilian, who was carrying a gun & then shot & killed the attacker.”

Clear as mud, right? Non sequitur piled on incoherence. So it helps to have the video which Reuters TV obtained from Youth Against Settlements, a Palestinian activist group in Hebron, West Bank, which suggests the Palestinian man was executed by the settler & that Israeli soldiers tried to cover the crime by planting a knife on the man.

From the distance of the video, it isn’t absolutely clear they planted a knife but they planted something & did not render emergency care. If proper forensics were done on this crime scene, there is little doubt an execution would be proven.

We needn’t stand helpless as our Palestinian brothers & sisters are under violent siege from Israeli soldiers & extremist settlers. Continue emergency rallies & build the hell out of the economic, cultural, & academic boycott of apartheid Israel.

Please view the video to compare Reuters caption to the actual event:https://www.facebook.com/eman.qasim.18/videos/1059811567383487/?pnref=story