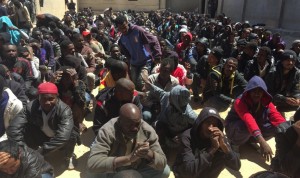 The news that 700 African immigrants who set off from Libya in a rickety fishing boat died in a capsize comes just days after the news that 400 drowned on the same route, considered the most dangerous immigration route in the world. So far this year already 1,600 African immigrants have died on that route. What will it take to charge the European Union (EU) & Frontex (the EU’s border control agency) with criminal negligence & mass murder? Frontex operates a high-tech surveillance system with live satellite imagery & drone surveillance for close-ups & have already reported 500,000 immigrants are in Libya waiting transport to the Italian island of Lampedusa. But they refuse to do search & rescue in defiance of maritime law & instead patrol the European coast to intercept immigrants.

It has to be said without hesitation that this is only allowed to continue because the immigrants are mostly black Africans. If they were white people, the entire world would be up in arms bellowing thunderously like bull elephants for the EU to send boats to get them safely across the Mediterranean. This is where you understand the malignancy, utter social debasement, & political utility of racism.

It is crystal clear the EU will not change its murderous immigration policy without massive opposition across Europe in defense of immigration rights. It is not presumptuous to suggest human rights activists across Europe hit the streets with placards demanding emergency search & rescue off the coast of Libya (& elsewhere) & asylum for every single immigrant.

Immigration is a human right! Granting asylum to refugees is an ancient humanitarian practice the EU cannot be allowed to flip off. Abolish Frontex! Dump the EU! Open the damn borders!