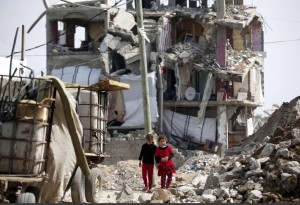 As Palestinian solidarity grows massive with the economic & cultural boycott of Israel, the small radical groups that used to stand almost alone in defense of Palestine have begun to retreat into the mysticism & kookiness of Zionism. The theoretical & political degeneration of the left is a process not yet sufficiently evaluated. But what do you bet some were just whack-jobs that are only happy when they feel left out? You could call them the happy misfits.

One such character now calls Palestinian solidarity an “antisemitic Arab chauvinist position.” Wow is that a mouthful! And it doesn’t mean a damn thing when you look at the rubble that is Gaza; when you consider Palestinian prisoners, including children, being tortured in the Israeli gulag; when you witness Zionist settlers from all over Kingdom Come building high-rise tenements on Palestinian farm lands in the West Bank. The only thing it signifies is political corruption & shame.

Take a look at this photo of two little girls in Gaza City walking through the Shejaiya neighborhood destroyed by Israeli bombers last summer. According to a UN report Israel killed more Palestinians in 2014 than in any other year since the occupation of the West Bank & Gaza in 1967. Now if you were to describe this carnage would you think “antisemitic Arab chauvinism” or would you have the decency to call it what it is: Israeli ethnic cleansing?