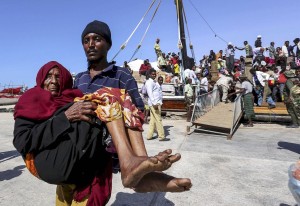 Photojournalists play such an important role in understanding politics because they capture moments like this which take war from abstraction to violent reality . This fellow is carrying an elderly woman off a ship of war-refugees fleeing Yemen for Somalia. That is the kind of mess the US & its monarchical allies have made of the Middle East–where you flee from Saudi warplanes in Yemen to US drone bombers in Somalia. Many of the refugees coming off these boats may in fact be among the 250,000 Somalians who fled to Yemen to escape US bombing or cross the border into Saudi Arabia to find work.

The US has been militarily involved with drones & special forces in Yemen & Somalia for years which is why both countries are in such utter shambles. The US has buttressed its propaganda about fighting al-Qaeda in the Arabian Peninsula with farcical spectacles like the underwear bomber & the ink cartridge bomb. Some analysts in the US even suggest the “instability” of the Yemen & Somalia regimes are a result of US interference. Of course it is. Chaos & civil conflict is where the Pentagon sees its fortunes & the very best way to destroy opposition & popular revolution against tyranny.

The Arab uprisings scared the hell out of the US, European, & most Middle East countries. Democracy would undo their at once extemporized & long-range plans for control & plunder of the Middle East. Turning people against each other is a colonial strategy, not viewed in the Pentagon as a regrettable consequence but the very end goal. It is also a monarchical strategy to maintain feudal control over kleptocratic capitalist economies.

To think that of the ten countries involved in bombing democracy into Yemen, seven are monarchies, one a military dictatorship, & two are tyrannies. That only makes sense if you’re completely stupid.

Our fullest solidarity with the people of Yemen & Somalia. Our pledge is to do our utmost to rebuild the international antiwar movement.