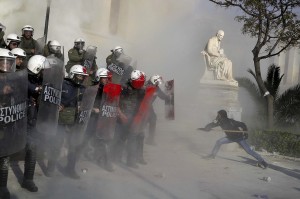 SYRIZA in Greece typifies one of the great divisions among socialists over whether you can get elected to public office & administer capitalism to get justice & equality & eliminate the barbarisms like war. It’s never worked out historically when the army & police, let alone the economy, were left in capitalist control. Barbarism is the nature of capitalism in its decline. Justice means nothing to them compared to profiteering. The human suffering created doesn’t even register as a concern & comes in handy for racist population control.

SYRIZA doesn’t have a model political program but even if it did they’d be up a creek without a paddle because not just Greek capitalism but the entire international system is poised to destroy & discredit them. That was played out in technicolor in debt negotiations between SYRIZA, the IMF & EU.

This photo of riot cops in Athens going after a protester is a case in point. According to media, the protesters are primarily anarchists against establishing high-security prisons & demanding the release of political prisoners, identified in reports as “terrorists.” Many protesters engaged in the political stock-in-trade of anarchists by burning cars, trash bins, & smashing windows. Such tactics are what make anarchism so attractive to police agents provocateurs & so repellent to the big battalions of social transformation. Without insights from Greek activists it’s not easy to understand the political character of these protests. Are they mobilizations against injustice or are they an orchestrated provocation against SYRIZA? Or are they (more likely) a combination of the two?

It may not be easy to understand the political character of these protests but it’s a breeze to condemn deployment of riot cops using tear gas against protesters. They’re a feature of neoliberal capitalist policing around the world. SYRIZA ought to dismantle them but the likelihood is SYRIZA has no control over the cops whatsoever. Greek capitalists are predatory; they’re not stupid & they hold the reins of state power closely, even if tenuously.

According to the media, there are also 4,000 miners protesting in Athens against SYRIZA’s decision to revoke permits to a mining operation in Skouries on environmental grounds. Some may look at this & say “Well if industrial workers are on the march denouncing SYRIZA, then that settles that. SYRIZA is counterrevolutionary.” But a closer look raises some questions. The mining operation is run by Eldorado Gold Corp., a Canadian mining outfit. They’ve already spent US$400 million in the gold mine project & want to invest another $700 million by 2017 to build a processing plant & develop two mines in the area. The company posted on their website that the decision to revoke permits threatens the creation of 5,000 jobs, but let’s get serious. What concerns them is the $1 billion investment & the obstructions created by environmental concerns, not jobs. So what do you bet they bussed those miners & likely mobilized company personnel for the protests in Athens!?

One promise SYRIZA made in the election campaign was humane treatment of undocumented immigrants, including closing down the detention centers. Frontex & the European Union are closing down the land routes through Turkey into Greece. They expect the Greek government to function as the first phalanx against immigration increasing by land & sea as a result of the conflicts in Syria, Iraq, Gaza, & elsewhere. Will SYRIZA stand up against the right-wing in defense of immigrants? Or will they capitulate?

Truth of the matter is, given the international forces arrayed against it, that SYRIZA doesn’t stand a chance without using its resources to mobilize Greek working people & build international solidarity to oppose neoliberal austerity measures; defend immigrant rights; & not just demand environmental protections from foreign corporations but kick them the hell out of Greece.